I know what you are probably thinking – rusks? Isn’t that baby food?

If you’re South African, or have ever travelled or met anyone from there you will probably have come across these.

Rusks are a hard biscuit (beskuit) which is similar to biscotti. Round balls of dough are closely packed in pans and baked like bread, then long chunks are cut or broken off and slowly re-baked to a dry consistency. They originated from the Eastern Cape in the early 1900’s, and were popular because they lasted a long time and could be stored easily. The story behind how they came about can be found here, here and here.

What was once a basic staple for survival is now one of South Africa’s most popular treats. They are eaten as an accompaniment to tea or coffee and come in a variety of shapes, sizes and flavours.

I decided to start making them because my husband was craving something to eat with his coffee when he was studying late at night without digging through the cupboards or fridge for a sugary fix.

This recipe is one that I’ve thrown together myself, so I’m not teaching you how to make rusks the authentic South African way. Making them properly requires dedication and more importantly time. This is my my cheat version which produces similar results but in half the time. The actual recipe sits about half-way between rusks and biscotti. If you want to give the traditional way a try I can recommend this recipe I found on SApeople and this one from Woolworths (yep, they have Woolies out there too, but it’s more like M&S).

You can make rusks as ‘healthy’ or gourmet as you like – from adding a mix of seeds, dried fruits and nuts to chocolate and caramel, there are no rules. 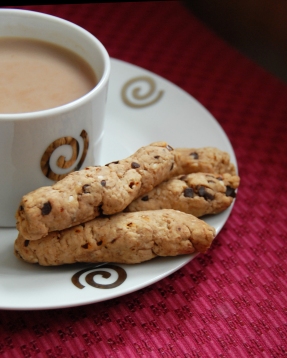 View all posts by Aiesha